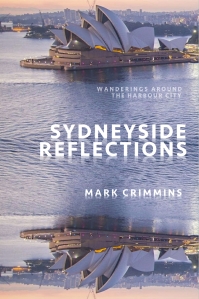 from Sydneyside Reflections by Mark Crimmins

Scroll below for snippets of Sydneyside Reflections

It’s a busy, beautiful, sunny holiday weekend Friday here in Sydney at the Queen Victoria Building, and people are milling about and strolling hither and yon as though they have no cares in this world … from Day One

Beef and Guinness Pie with Mashed Potatoes & Smashed Peas. In you go. You sit at a table and wait for service, which doesn’t materialise. Finally, you go to the bar, buy the dinner and a Carlsberg and wait for your food. from Day One

A fur-lined slipper, also not going to be a big seller, as the heatwave is now predicted to afflict New South Wales, though Sydney itself may be cooled by a ‘harbour breeze.’ from Day Two

You look up ahead of you at the splendid old Victorian galleria, reading the shop names. Geurirshaus Herb and Spice Merchants. Coombs While-U-Wait Shoe Repairs. Dustins Jewellers. from Day Two

Having forgotten your lighter back at the hotel, you ask a girl who is smoking nearby for a light and have a cigarette to celebrate the samosa. from Day Two

You are struck by how anodyne and affluent the harbour is. Hong Kong’s harbourfront seems amazingly dirty and gritty by comparison. from Day Three

Next, you see a headline that interests you personally: “Mormon Who Led Gay ‘Conversions’ is Gay.” You get a kick—as a person who was raised in the Mormon cult—from this article’s title … from Day Three

You pass a young girl whose T-shirt message puzzles you but makes you smile anyway: 99% Confident! from Day Three

You heard, as you walked, the churning of water and thought it must be a stream, but down by the water you saw that it was in fact a harbourside lap pool full of Aussie swimmers. “Look at their form!” from Day Four

Perhaps. The heat starts to get to you as you pass into the green space of the Barangaroo Reserve and keep plodding along with the sun at your neck and your pace getting sluggish, though you have barely walked ten kilometres so far. from Day Four

The twilight still lingering, you admire once again the Offerings of Peace and Offerings of War statues and take a second picture of the Robert Burns statue. After all, you reflect, you landed in Sydney for the first time on Robert Burns Day. from Day Four

Sydney is lively! It’s a regular day. Everyone is going to work and the crowds of people make you happy. from Day Five

There was plenty of sugar in that thar Aussie French Toast, needless to say. Perhaps you should eat a plate of it every day before you start to write. from Day Five

You pulled a Fox’s Glacier Mint from your Nomad backpack and popped it into your mouth. How long would it take for you to eat the candy … from Day Five

You order your long black and the Lots Froth Breakfast, with its double hashbrowns and eggs and toast and a big slick of baked beans. from Day Six

The humidity gets you if the temperature doesn’t. You like Bondi Junction a lot, but you must move on, buy some water, walk to the still far-away beach and try, once there, to get onto the famous scenic walks around it … from Day Six

The long-haired surfer you were worried would ask you for a smoke, who sat on the other side of the pavilion’s dividing wall, when he was chatting up the Thai girl sitting there on her own, complained about how ‘warm’ it was. from Day Six

… your wallet is an invention peculiar to you. It consists, simply, of a stack of your bank and credit cards, with your paper money wrapped around it and held in place by a bulldog clip. from Day Seven

A rough-looking guy on a bike seems to know the cameraman and chats with him. As the cyclist rides away, a beautiful, smiling, well-groomed TV presenter in a black dress comes striding confidently up Saunders towards the cameraman, flashing her perfect rows of super-white pearly whites. from Day Seven

Back on the street, as you turn into the hotel, you see something odd. A rugby ball is careening like a bouncing bomb down the tram tracks on George Street. from Day Seven

Beyond the bridge’s northern pylons, you descend the stairs into Kirribilli. A word you like a lot. It denotes a famously exclusive enclave, very beautiful indeed, on the other side of the bridge. Some unhappy looking Jehovah’s Witnesses stand beneath the arched tunnel under the bridge’s roadway. from Day Eight

The problem, apparently, is that other Asian countries and cultures which celebrate the Lunar New Year are not Chinese. Therefore, here in Sydney, it has been decided to refer to the season more inclusively as ‘Lunar New Year,’ rather than ‘Chinese New Year.’ from Day Eight

The kids are very endearing as they scrutinise and discuss the cakes with delight. The bigger kids buy the goodies for the littler kids. from Day Nine

This is Sydney, after all. What self-respecting Sydneysider would decide to go into his or her bank job on a Saturday in the summer, even a rainy Saturday? from Day Nine

A place history has overwritten but whose original writing is still visible in traces, beneath that which was superimposed upon it. from Day Nine

A stream of people flows in, though the locals don’t seem too pleased about outsiders such as yourself eating their pies and sausage rolls, some of which are already sold out. from Day Ten

It’s very quiet on this Sunday night. Nothing is happening right now in party town Sydney. The weekend is over. from Day Ten