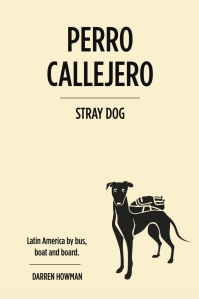 Scroll below for snippets of Perro Callejero

“Yeah, the last few months have been amazing,” he tells the semi-circle of avid listeners. “We were flying, like, this far away from giant condors.” from Santiago

We order a couple of cheap vinegary house reds. The giant wine glasses they’re presented in hold practically a half bottle each. from Punto del Diablo

Popayán. It’s a UNESCO world heritage site, a picturesque grid of streets made up of low-roofed whitewashed buildings capped with terracotta tiles. The hostel, despite the backdrop, is not so picturesque. from Popayán

Studying child psychology in university and raising two daughters under five, it’s a wonder she finds time to teach in the school. from Life in León

The hot sticky bus carries us out to Las Peñitas where we find a beachside bar and cool off with a Granadita, a delicious mix of coconut water, orange juice and rum – a classic Nicaraguan drink. from Las Peñitas by Night

The Palenque terminal resembles the interior of a KFC fast food joint. Red plastic chairs sit side-by-side in rows, and at the back there is a red-and-white painted wall with a series of square holes where tickets are dispensed. from Chiapas

The clouds grow darker and angrier as the evening progresses, and Dan follows suit after finishing the gifted bottle of grog and chasing it with another of red wine. His incomprehensible slurring begins to scare me a little as he grows more abrasive with every mouthful of booze. from Parque Santa Teresa

At 3am I awake in my seat, frozen to the bone. I’ve been more or less crammed into the same position for six hours. I pull the curtain back, hoping to see something in the dark. from Arequipa

“I’m studying gynaecology in the UK, and got a work experience placement in a hospital in Ecuador.” He pauses. “That’s all over now though, so I’m having a holiday for a couple of months.” from Fritz the Cat

The first encounter with a new country is both scary and exciting. In this case our no-man’s land is a walk across a bridge – an obvious symbol, and one that holds all the more weight due to its rickety and questionable state. from Sixaola

By now we get the difference between the expensive bus and the chicken bus – the chicken (public) bus is cheaper – but slower. Mas barato and mas lento, compared to the private bus he’s trying to sell us. And even if I don’t much like paying for the more expensive route, I also don’t relish the idea of being stuck in the confines of an uncomfortably hot bus surrounded by squawking animals for hours on end. from Antigua Revisited

The potholes that have now become the size of bomb craters throw us into the air during the six hours of bumpy dirt roads that become progressively worse. I have a feeling we’re driving to the edge of civilisation. from Frontera Corozal

“¡Adelante! ¡Adelante! ¡Rápido! ¡Rápido!” He ushers us all on foot into the two small wooden boats that bob at the shoreline of the lake. Small waves lap up on shore one after the other and the vast body of water disappears over the horizon. from Copacabana

Our driver, Alfonso, is an emaciated leathery-skinned man with greased jet-black hair that hangs limply around his giant oyster shell ears. He sucks at a quid of coca leaves bulging in his cheek, making him appear as though he has a huge tumour on his face. from The Alti Plano

Like a slug dolloped with salt, he curls into an uncomfortably contorted twist of hairy arms and legs. He is not silent like a slug, however: he lets out a staggered series of loud piglet snores. from Bogotá

Soon we arrive in the centre: a busy little market town where light traffic cohabits with ox-drawn carts plodding through low-terraced streets, some houses painted in bright hues while others reveal eroding mud walls of adobe horizontal stick construction. from León

The birdsong sounding so peacefully through the trees is destroyed by a group of tour buses skidding into the car park off in the distance, and we wait for what can only be an onslaught of day-trippers. from Semuc Champey

Mexico City has an extensive subway system, so we descend from our bus depot into an underground passageway. And what we find is not what I expected. If first impressions count for much, we are about to be very impressed: this place is spotlessly clean, and there is clear signage to direct us whichever way we choose. from Mexico D.F.

Brightly painted murals that surround the shiny red door and sparkling clean windows beckon us in. But on entering, we start to think we should have stayed where we were. from Mendoza

If the overcrowded bus-on-tracks was not the first indicator that we should rethink the trip, the driver’s attire and driving skills should have been the second concern. For some inexplicable reason, he is wearing a red construction site hard hat … from Sucre

Snuggled in warm beds with a thick drizzle falling outside, we flick on the remote and spend a relaxing day in the comfortable warmth of our room. Late afternoon falls upon us and our peace is shattered when the others return. from Otavalo

But I’m not ready to go dig in the sand. I’m enjoying my drink with Eva too much. We are sitting at the table, looking out to sea, the tension between us palpable. from The Waterbed

“No quiero mas,” she tells me as she goes to leave, stating unconvincingly she doesn’t want any more. Paying no attention, I take her in my arms and kiss her. from The Return of Jan

We leave the old man with his magazine and sit across the road at a shady concrete plinth where a faded bus sign hangs from a wooden stake. There, we wait in hope for the afternoon chicken bus. from Tikal

“No hay tours. Vayase,” he says, clutching a short-barrelled shotgun and shaking his head. In no uncertain terms, he tells us to go away. from La Paz

And I see now that this is a sprawling city, unlike anything I’ve seen before. The maze of interlocking corrugated iron shacks neighbouring the Retiro bus terminal is an altogether frightening sight. from Buenos Aires

“Just last veek, three guys who had sailed vis an inexperienced captain had to pull zair own mutiny,” he tells us. “Zee guy was drunk zee whole time and got zem lost at sea.” from Captain Fritz

“If you want an adventure, this is where you’ll get it,” Frederik assures us over breakfast, describing the even smaller village of Cielo Verde another two hours deeper into the jungle. from Cielo Verde

“The eight-year-old son of the local police chief was kidnapped and a ransom of two thousand dollars was demanded,” she says one day, speaking in a slightly different Spanish to the Nicaraguan inflection and tone that I’m used to. from Life is Cheap

Even so, my mood lifts. A feeling of happiness washes over me; I’m actually glad my pockets were empty. The little street beggars trained to extort money have changed to joyous kids chasing balloons. from Flores